No doubt plants have life, but to what extent is their life compared to animal and human lives? Do plants have consciousness and emotions like us humans do? Are humans so different from plants and other parts of the ecosystem after all? These are some thought-provoking questions that last lecture left to me.

Granted plants seem static, but that’s only because we are looking at them from a human standpoint. California redwoods, for example, have longer time span than colonies have existed in this land. Chinese philosopher, Master Zhuang who lived around 2500 years ago, once recorded these long-living ‘magical’ trees. In his poetic writing, he said “楚之南有冥灵者，以五百岁为春，五百岁为秋；上古有大椿者，以八千岁为春，八千岁为秋,” by interpretation, there are trees that take five hundred years as a spring season, and another five hundred years as fall season, some needs eight thousand years to grow a season. With a bit of an exaggeration, the ancient Eastern philosopher tells us plants have a much different timeline from what we can perceive in human life span. 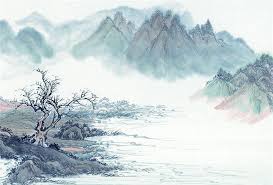 I’m also very inspired by Jae Rhim Lee’s proposal of the mushroom burial suit. When she introduced the “infinity burial project” and the inspiring idea of cultivating edible mushrooms to recognize her body debris, she also brought in this new way of thinking of death as decomposition – human becoming part of the ecosystem, or the circle of life. I also looked up on the project Myconnect website where I found these challenging yet very interesting ideas on forming the immersive interaction of human life with the environment. By connecting one’s neural network with the growth of Mycellum, a human life is essentially bonded with another species and thus achieving this interspecies interface. This allows an unnatural symbiotic connection: a heartbeat resonance input into the fungal mycelium and visual and auditory output into human neural network. The philosophy behind this project is very profound: we always think through our anthropocentric lens and isolate human bodies from the rest of environment. Maybe it is time for us to step out of our box and reconnect back with nature. While innovative, the questions are also raised, if this were to be applied to every species, then where would the boundaries of the species be? Or what life form or what role would human retain in this massive connected network of our ecosystem?

I myself am really interested in gardening and have been doing experimental planting in our balcony ever since I moved in our apartment. I have grown mostly herbs (mainly for convenience of my experimental cooking), some shasta daisies (which is my favorite flower!). My grandma and I used to grow cherry tomatoes and ginger back home in Beijing.

Herbs and flowers that I have grown in my balcony thanks to the lovely sunshine in SoCal.

Seeing Mary’s enthusiasm in hydroponics and other alternative way of growing plants, I realized it not only saves an incredible amount of space compared to traditional soil gardening, but it is also great way for water utilization and time saving. I found this picture useful for summarizing the theories of most alternative ways of gardening and I’m very eager to try any of these in the future!

Top: alternative methods of horticulture; Middle: before and after comparison of transplanting Mary's new projects; Bottom: a greenhouse using hydroponics to achieve space and water saving